For the past two summers nine-year old Leah Clow has tramped up to the black petrel colony on the top of Great Barrier Island with her dad Adam, a commercial fisherman from Whitianga. 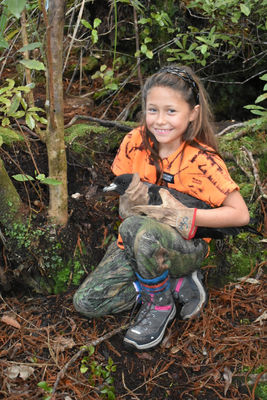 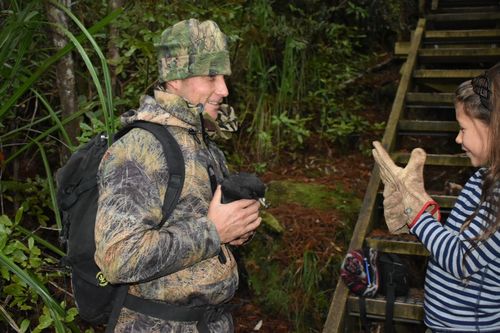 Leah and Adam are helping out the seabird research team and Leah is already an expert at handling the birds.

Adam first became interested in black petrels after attending a Seabird Smart workshop where he learnt that the species used to breed in colonies throughout the North Island and top of the South but is now rarer than our kiwi. The small remaining population is at risk from fishing and fishers in the FMA 1 bottom longline fleet are involved in a joint government/industry camera trial to determine more accurate bycatch numbers.

This season Leah and Adam helped attach satellite tracking devices to fourteen black petrel chicks just before they fledged. One chick was named Leah, and she and the other youngsters all made it off the island and out to sea.

This is the first of many challenges the young birds face - in pitch darkness having never ventured far from their burrow, they need to find a rock outcrop or a tree to climb to take off above the forest canopy. One chick crash landed further down the mountain but got away the next night. Once at sea they all began a long flight across the Pacific Ocean.

Four of the devices stopped sending signals during the crossing, either because the battery failed, the device fell off, or the young bird died. The other devices kept transmitting, some well beyond the expected lifetime of the battery.

Incredibly, the birds followed a similar route, turning north roughly around the same latitude, and making their way to the seas to the west of the Galapagos Islands. Three birds continued travelling into near shore waters of Ecuador, Colombia and Panama.

During the 2-3 months that the young black petrels were tracked, each bird travelled an average of 12,329 km. Fairly impressive for a first flight.

This Southern Seabird Solutions project was funded by the Auckland Zoo Charitable Trust and carried out by Wildlife Management International Ltd.